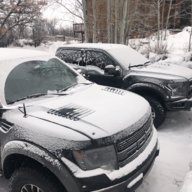 Have a 2013 Raptor, 75K Miles. Recently started getting loud whining noise as I drive down road. Initially I thought it was road noise from my work tires that I had not rotated and balanced in a while in anticipation of getting new ones. Particularly since my back tires were pretty bald i thought it was tire noise. We’ll i just put new KO2s on and now it’s pretty clear that it’s a differential noise. Coincidentally while they were changing tires I noticed dark spot on right side of bell housing that looked like a leak. So when noise persisted, I explored that as the culprit thinking the fluid had gotten low and that was causing the noise. Yesterday I had the diff serviced, new oil put in and the mechanic said their is definitely some wear in there and some play in the pinions. He said it’s common on F150’s as the power and tires are too much for the rear end they put on them as compared to a 250 or a 2500 chevy/dodge. In a past life I had a 2002 lifted 2500 Silverado with 8.1 liter 454, 4.10 rear w/Allison tranny so i knew what he meant. I digress. So after the service, the noise is still as loud as ever. Mechanic said he’s going to give me a price on a full rebuild but wanted to get your thoughts and see if anyone has experienced the same.
C

Had the same issue on my 2012. It was the rear pinion bearing. Kudos to the mechanic that found it. Wasn't real noticeable by eye unless you know bearings. Could see pitting in the rollers and the marks from it on the outer race. 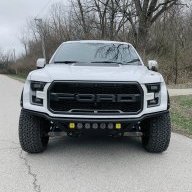 Had one too. Pinion bearing^^ I couldn’t figure it out for a long time..

what was the culprit? 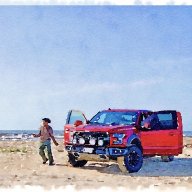 I have a Gen 2 (specifically a 2020) Raptor, but thought it would be worth sharing my similar experience here, since there don't seem to be as many people with this problem on their Gen 2 trucks. Similarly to the OP, my noise started fairly mild. Having just gotten back from a couple of weeks out of state without the truck, I was initially struggling to determine whether I had just grown accustomed to the lesser tire noise of the rental car I was driving and wasn't used to the noise of 35" mud-terrains, haha, but after driving a bit more, the noise had soon become very obviously not just tire noise and was clearly coming from the rear differential. When I finally took the rear end apart, you could produce the noise noticeably even if you manually rotated the driveshaft with the vehicle lifted and put into neutral. It had gotten pretty bad, and had developed a distinct "bad bearing" quality not too long after I first noticed something sounded off. It was a lot like the sound of a bad wheel bearing, but it was obvious that it wasn't after lifting the truck, putting it in gear, and stopping each wheel one at a time, with none of them causing a reduction in the sound. The sound was also not present when you turned the rear wheels in opposite directions (so the driveshaft was not rotating), but was audible when you rotated the rear tires the same direction (so the driveshaft rotates).

Interestingly, I never could feel anything obviously wrong when driving the truck. I'm sure it'd have eventually gotten bad enough to affect drivability, but despite sounding terrible, if I were deaf I'm not sure I'd have known anything was wrong with the truck. Anyway, upon removing the diff cover, the fluid looked pretty dark and had metal particulate suspended in it. Thankfully I hadn't let it go long enough to cause any noticeable wear to the gear teeth, but the pinion bearing had begun to disintegrate. Thankfully, with only the bearing and fluid in need of replacement, it was a cheap enough fix to not bother with trying to get it fixed under warranty (with all the nearby dealerships I called estimating about eight weeks before they could work on it, that would have conflicted with holiday travel plans…I actually took the truck to the dealership first to see if the warranty would cover this and a handful of other issues, but after two months of excuses from the Ford Dealership about why they hadn't even looked at a single one of the issues, I took the truck back and decided to deal with things myself…it took two weekends and a couple of evenings to address all the issues, and the total parts cost wasn't even as much as one week's worth of making payments on a truck I didn't have access to while it sat untouched in the dealership's lot...I guess attempting to get warranty coverage isn't always cheaper ). There's a decent chance that warranty would have been denied anyway, since I had replaced the rear suspension with the Deaver +3s, and they could try to pin the blame on that.

Honestly, it may have contributed, since I went with the +3 leaves with the intent of building storage compartments and drawers in the bad and adding a rack, plus all the tools, parts, and camping gear that will go in it and be kept in there unless I need to haul something large in the bed. Things got busy since then, and it's had much less weight in the back than intended, and so it's been riding with a neutral height about 1" higher than stock, which does put the driveshaft at a steeper angle more of the time. It doesn't seem like much, but I also had regular misfires when >14 psi of boost which turned out to be due to a damaged intercooler fan, so I could believe it, ahaha. I've also tuned the truck to produce a bit more power. Nothing too crazy, but I could see how more torque applied to a slightly more angled driveshaft could cause the bearing to give out sooner than you might otherwise expect (the truck had 32k miles on it at the time of the bearing failure, although almost 25k of those miles were off-pavement, a not insignificant percentage of which were over terrain that challenged the limits of the truck in its current configuration). Hard to complain when the part that gave out could be replaced multiple times for the price of a single tank of gas!

Anyway, I hope this helps someone having similar issues! Even as I began to narrow down the possible sources of the sound, it was difficult to find posts from other Gen 2 owners describing similar situations, which I find often helps to give diagnostic hunches a sort of "sanity check" to see if owners of similar vehicles experienced similar issues.