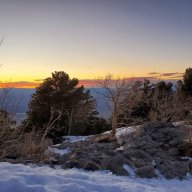 Out of curiosity, what kind of range between gas stops do you get with the truck? 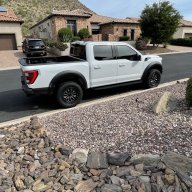 Get rid of those stripes and it would look way better. 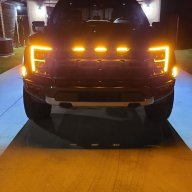 New recaros said:
Get rid of those stripes and it would look way better.
Click to expand...

Yeah, your eyes are immediately drawn to those damn things.
F

All a matter of taste, fortunately there are options or we would all be driving the same thing and it would be pretty boring. Interestingly I get stopped more with the truck than the cobra (both often) with admirers asking about it. For miles about 320 between fill ups, V8 with more fuel flow from the bigger throttle body, supercharger and reprogrammed ECU as well so to get the HP uses a lot of gas - Premium...definitely a downside to the horsepower. Brakes-- I think that is the one thing they did not do how I would have liked, they are stock brakes, cheaper to replace, but would have liked a bigger disc / pad combo. That said they stop just fine, not an issue at all, the truck probably weighs no more than stock, with the polycarbonate hood might weigh a bit less than a similar truck however with 700hp would be nice to have some extra braking. 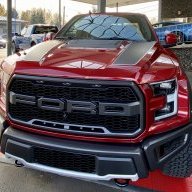 I got the Shelby super Baja f250 and love it. Replaced my gen 2 raptor as I needed more tow capacity for my Malibu m240 surf boat which is 11k pounds. 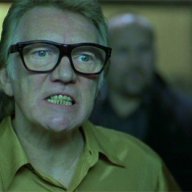 RCorsa said:
I got the Shelby super Baja f250 and love it. Replaced my gen 2 raptor as I needed more tow capacity for my Malibu m240 surf boat which is 11k pounds.
Click to expand...

F-150_Cobra said:
There are different versions of this truck. The 4x4. the lowered Super Snake, and the unaspirated version and it seems some of time times and comments are based on different versions. The current version, with 4wd, is rated at 0-60 in 3.45. I have the 700hp supercharged 2016 version that is rated, and I can attest to, 4.5 sec 0-60. It is a fast truck. The 2 times I have let myself go with a Raptor at the line I have won handily, no idea which version of the Raptor, and I love the Raptors, great trucks. Yes, Tuscany Motors in Elkhard, ID builds the trucks, that is their specialization. They give good support. Shelby American, which I live very closely to and go there often, build the GT350s and GT500s as mentioned. They are tapped and Trucks are not their forte, so they license Tuscany, smartly since they are not truck experts like Tuscany. Tuscany does much more than listed. When I needed info for my truck Shelby gave me what they could but directed me to Tuscany, who were awesome. All modifications done by Tuscany approved and licensed by Shelby American. True that Shelby has put its name on some things in the past that were not up to Shelby levels we all would want, but it seems they quickly learned and moved on, we are in year 6 of the F-150 Shelby and it is a bad ass truck from someone who own one. Shelby F-150s are sold new at Ford dealerships, so they are affiliated with Ford at least in that way. I also own a 427 S/C Cobra replica made by Superformace and licensed by Shelby and quite happy with that as well, I did not want a kit or a non-Shelby Cobra and couldn't afford the $2.5m+ for one of the remaining 29-31 originals. I would not steer clear. I could sell mine for more than I paid in 2017 (used), they do go down in value from new, but hold pretty well in the $60k plus region depending on condition and mileage.
Click to expand...

Ummm….how is that not a kit car then? It’s not a Shelby cobra. It’s not a restomod. It’s a knockoff fiberglass cobra shell on a tubular frame made by a custom car shop & im pretty sure they don’t even do anything in regards to drivetrain right? You get a rolling chassis & gotta put your own engine in it? It’s like the very definition of a kit car bro hhahaha

I imagine you think a factory 5 cobra is a kit car but yours isn’t lol!?!?


On another note Shelby branded vehicles….much like Hennessy….are NOT desirable whatsoever as soon as their newest tweaked version comes out. I dunno why that is, never really was a huge fan either way. I did like the Shelby super snake restomod stang