RAD972 said:
Hey everyone FNG here...I just purchased my new to me 2018 Raptor with 40k miles back in December. Found this very informative forum and Happy to be part of the Raptor community.

Anyway I've been doing some research and trying to figure out if the wheels on my Raptor are actual beadlocks I know ford makes the capable beadlocks but I haven't seen any set-up like mine...plus the tire looks wider then a standard Raptor tire. I'll post a pic if anyone can confirm it would be great.

Previous owner was the Ford dealers son. Also if these are the real deal does anyone know what the Torque specs are for these or where I can find the maintenance requirements on them. Never owned beadlocks. I had a fully built Jeep Wrangler last 12 years but never got the beadlocks for that either.

Not sure on OEM but most aftermarket beadlock wheels are between 16-25lbs (Raceline 16-18lbs & Method 20-25lbs). Crazy that Ford is 48ft lbs). Both companires recommend a re-torque every 200-500 miles. You could probably check them every 500-1000. I think most companies are just covering their a$$e$ when they say 200. This really is the biggest downside to beadlocks on a street driven vehicle (especially if it's a daily driver). If you're driving 100+ miles per week you probably should be checking them once a month.
Last edited: Mar 2, 2022
8

Rep732 said:
I really like the way the wheels look with the beadlock rings. I'm just wondering if I'd ever have an issue. It's very tempting
Click to expand...

I like the way they look too but I honestly wouldn't run them unless your Raptor is primarily used offroad and your having issues losing the bead. Not many tire shops (around here at least) will touch them either due to potential liability as already mentioned. 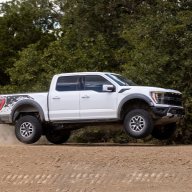 Keshka said:
Interesting article Russ; I appears in the long run it's just a CYA for manufactures. Maddigi goes on to suggest "if the bolts are not tight" As a mechanic, makes no sense to me. Equates to if your lug nuts are not tight. Both equal the same end result. "You picked a fine time to leave me loose wheel". I have three calibrated and registered torque wrenched and engineering charts that marry every type bolt with every type material. I have worked with the liability of knowing if I don't properly torque the head bolts on an engine I just rebuilt it will be my ass my customer wants a piece of. The whole issue sounds like the sticker on your new lawn mower asking you not to put your hand under it while running.
Click to expand...

The problem is that you're clamping rubber, the tire, between pieces of metal. Rubber is squishy and regular re-torquing is needed. Could you imagine if every truck came from the factory with beadlocks? 90% of people won't maintain them.

Driving through town would look like one of those crazy russian dashcam videos on youtube, but worse. Trucks flying off of overpasses daily.

I love watching those crazy Russians drivers on YouTube

you always have had to buy the ring kit and have the tire mounted differently..

i regularly run 12psi and do donuts and jumping and drifting at the dunes without a beadlock or beadlock capable wheel. 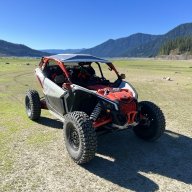 Seems like an oddly silly complaint. The amount of people that actually need or use beadlocks on Raptor is probably <1% and of the ones that do probably never talk about it. I have true beadlocks on my UTV because well I rarely ever run more than 10psi and in winter see as low as 2-3psi. Summer in the high desert blasting through rock at 70mph I like to know my tire will generally stay on my wheel.

Beadlocks on a street driven vehicle is pointless end of story. They will likely leak at some point, require re-torqueing as mentioned, have a max psi you can run pretty much negating any "truck" duties the Raptor will see such as towing, and other negative benefits. Not to mention if you pull into just about any tire shop they won't touch them unless it's a specialty shop and even then they likely won't work on them unless you trailer your rig there due to liability and regulations.

Talk to Innov8 or even Method and they will tell you how they machine the lips of their wheels slightly different than others to combat bead slippage or unseating. Ultimately, if you aren't running under 20psi for long periods of true off-roading or actual baja racing they are for looks...hence many if not all wheels using "beauty rings". As one poster said and it's 100% true, if you actually thought an OEM gave you bead locks right from the show room floor you clearly don't understand and likely wouldn't ever need them. Also, yes most states outlaw the use of them on public road ways.
R

Thanks to everyone that responded.
I do daily drive it and luckily I have a 4 wheel parts store down the street for service needs.
Guess I'll have to invest in a good Torque wrench use the template and check it. I've been driving over 2500 miles had no idea this was required with a beadlock. Purchased at a Ford dealer and they never even mentioned anything about this.

@RAD972 I can't say I'm surprised they didn't mention it to you, as usual with car buying its upon you to be observant of the vehicle your looking to buy
OP
OP 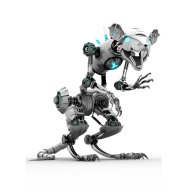 I have been racing dirt bikes for 40+ years and truly appreciate the value of the rim locks used there. We seldom had them available on stock wheels in the 70's so they were a god send when we finally got them. No more ripped out valve stems. When I read fords "capable" wording to me it mean maintaining the proper tire/wheel combination. IE some tires would not work with a bead lock system. That made sense. Unaware of the DOT standards I never expected a beauty ring and instead expected a functional bead locked wheel/tire combination on the truck. The link reposted by "Rep732" was very informative. It taught me exactly how this type of bead locks work. It indicates these wheels have two possible locations for the outside bead. The outer most is used with the SVT version of the lock ring. From the instructions SVT printed it appears when fully tightened the rim lock makes physical contact with the wheel. (see page 8 of 10) where it states the sudden torque increase and zero gap. Properly torqued bolts seldom loosen in a metal to metal joint that said, seldom is defiantly NOT the same as never. But think about it when was the last time you had a rod cap come loose or better comparison, a cam shaft journal cap on an aluminum head ..where similar material is used to a bead lock wheel and lock ring together. If I decide to run them, they will be routinely checked. I never purchased this truck to be a daily driver. I live smack dab in the middle of 100k acres of BLM and forest service land and when driving off pavement, under inflated tires work very well for slow work. Higher pressures are needed for high speed desert work. The tire needs to be soft enough for the best traction yet firm enough not to "rim pinch" when an obstacle is struck. On my dirt bikes I constantly adjust tire pressure to match the terrain I will travel over.

Thanks to all whom offered constructive advice and information. This forum is a very valuable resource.