So you're telling me the ubolts are holding the lower shock mounts in place?
OP
OP 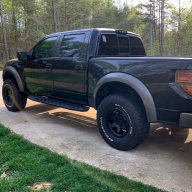 NateMob said:
So you're telling me the ubolts are holding the lower shock mounts in place?
Click to expand...

Nah, it's welded. But it could. At least for a bit anyway.
N

Thank goodness, I am a big fan of RPG but thinking those weren't welded solid did not give me the warm and fuzzy feeling! haha

Install went down last Friday. My first experience with SVC as most of my parts of this nature have come from RPG. Mostly good things to say about both outfits.

Customer service - Sales reps from both companies were really good to deal with. If I had to give the edge to one, I'd say RPG, but both were great. Along those same lines RPG's military discount was also slightly better (10% vs 7%).

Cost - Both pretty expensive, but not out of line with anybody else. SVC was significantly higher in shipping ($450 vs $200). More on this.

Quality - Both super high quality parts and fasteners as most of you know. Zero complaints here.

Delivery - Nightmares on both ends here. With the freight company for RPG (YRC), my delivery made it made it across most of the country smoothly and then got stalled in Memphis for like a week. The SVC carrier (RoadRunner) was quick across the country and got to my local terminal in a like a week, which is good because it was so expensive. And then no visible movement for a few days as they transferred it to a partner carrier for residential delivery. I ended up running it down and picking it up myself because they weren't going to make it in time for my planned install. Trying to get answers out of either carriers customer service was nearly useless.

Install - Both came with the same amount of instructions (zero), but both were also pretty straight forward.

I chose the SVC bumper purely because I prefer the aesthetic over all of RPG's offerings, but also curious to know what it was like to deal with them. I'm happy to work with both companies on anything moving forward. Top notch so far.

First step of the install is to pull off the old bumper obviously. You have to unbolt the hood release which I think was like 3x 10mm screws. Remove some of the lower and passenger side rubber flaps. Then the bumper itself is just 4 nuts from the back side. I think 21mm.

Marked the frame. The guidance I found online says use this small hole in front of the big hole for vertical. 2 inches up slope back 45 degrees. Should be in line with the forward edge of a rectangle cutout on the bottom. This worked out fine. No issues or re-cutting. 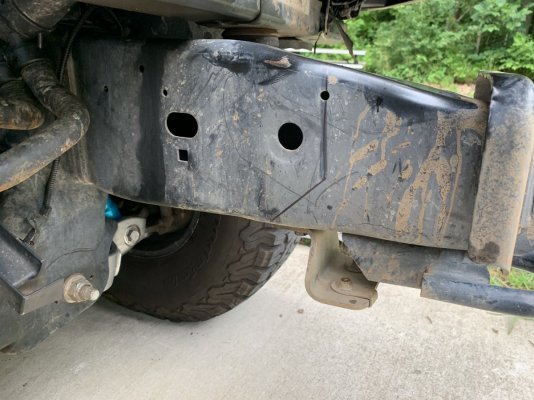 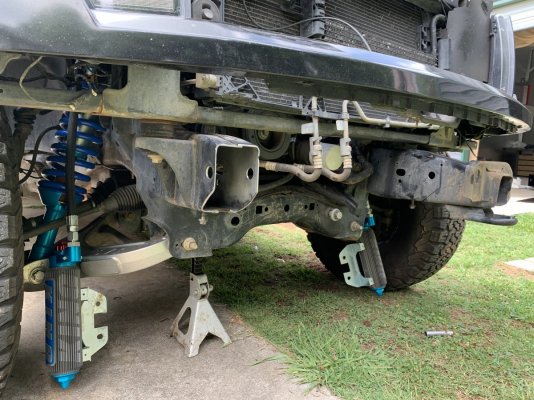 I had to open up the frame holes just a touch to get the bolt sleeves in. Step bit made light work of it: 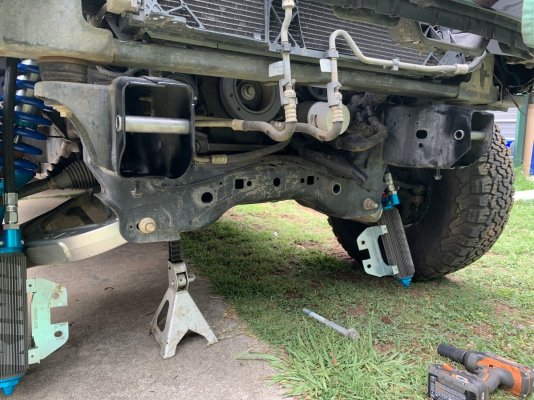 The bumper mounts off these points and the steering rack bolts: 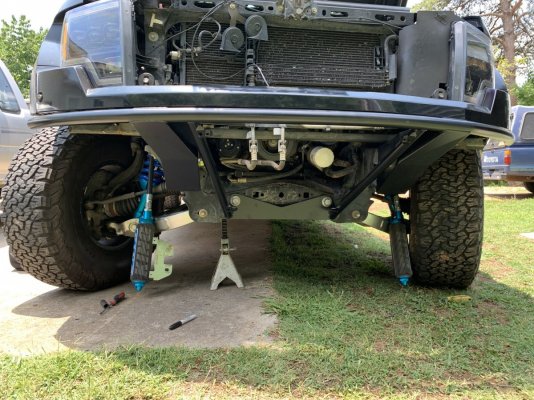 Looks like oil filter changes will be a good bit more accessible now. 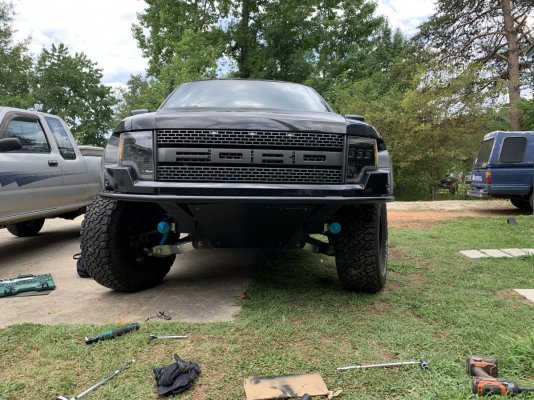 Other than cutting the frame, the worst part was figuring out the resi mounts. Still not happy with this as the cans protrude past the angle of the bumper, but I'm sort of at the mercy of the hose, fitting, and bracket configuration, so it sort of is what it is until I can figure out a better solution. But after the rear shocks last weekend and motor mounts the weekend before, this job was pretty easy.
OP
OP

Yanked this hunk of crap out last night: 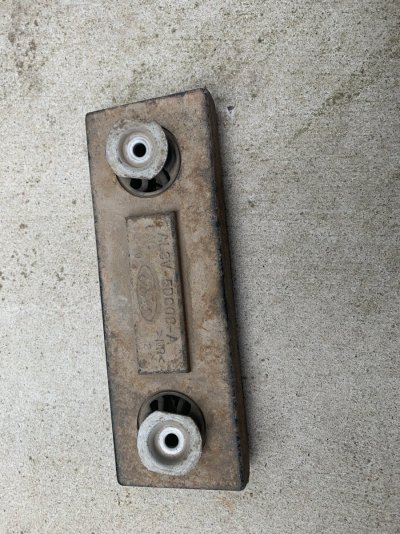 Bushings finally gave up the ghost. At first I thought my bypasses were way louder than I expected. Then I figured I’d check this thing out and sure enough was floppy as hell. After re-reading the 10 or so pages of merged threads regarding this I went out to tackle it. One dude mentioned being able to take it out with a ratcheting wrench so I figured I’d try that route. Is it possible? Yes. Is it easy? Not really. I think raising the box a little or cutting the bolts would have probably been the move but I’m hard headed. Also played with the idea of strapping a big zip tie around it which did work. Anyway if you go the ratchet wrench route and don’t have the kind that you can toggle the direction on be prepared to have your tool trapped between the bed and bolt if you back it all the way out. Advice would be to remove the tool while you can and then use the open end or fingers to back the bolt the rest of the way out. Got her done but it put up much more of a fight then I expected. All the clunking is gone now and I can hear the actual clicking of the bypasses. On to the next.