Just curious if there was ever a 09-14 F-150 that had black speaker covers for a non-Sony system. Currently the ones I have are from my 2013 Limited truck that have the Sony lettering on them, and I would love to find a set that are still black, but without the Sony lettering. I was going to just remove the lettering, but it's actually indented into the mesh. If the black non-Sony ones aren't available I may end up just having to get the gray ones and paint them.
OP
OP
C

Did some more digging around on this. The only trucks I can find that had black speaker grilles were the Limited and FX4 Appearance Package, both of which came standard with Sony systems. It seems like at this point I would have to get the gray ones and paint them, but I may just remove the Sony lettering and deal with the indented part. I think it would be nicer to just have ones that came factory black than painting them.
OP
OP
C

Would anyone be interested in trading their gray non-Sony speaker covers for my OEM black Sony ones from my 2013 Limited?
OP
OP
C

I'm thinking what I may have to do is have some Focal emblems made to cover the Sony ones on the front speaker grilles. My only other option at this point would be to get a set of gray non-Sony grilles and paint them. You can't remove the Sony emblem from the grille without it leaving some odd holes.
OP
OP
C

Thanks to @Jhollowell for designing these emblems! Was able to remove the Sony ones from the speaker covers easily and glue these ones on. I just filled the recesses with white paint to make it stand out a bit more. I tried a silver metallic and it looked like crap, the white looked far better. I believe that's the last piece I have to change in the interior at this point besides getting the lighted rear door sills done. 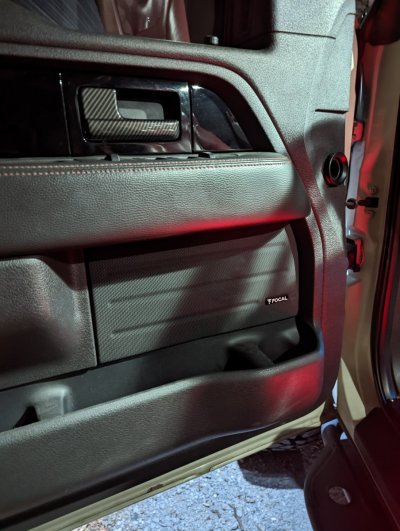 Glad they worked out for you!! I'm going to paint mine today and do the same thing. I tried just doing an outline but from far away they just look black.
OP
OP
C

Jhollowell said:
Glad they worked out for you!! I'm going to paint mine today and do the same thing. I tried just doing an outline but from far away they just look black.
Click to expand...

Yea, I tried a couple different things and ended up with the filled in white. The silver/chrome looked a bit tacky, the red didn't really show up well, and the outline didn't show up well either. The white filled ended up winning.