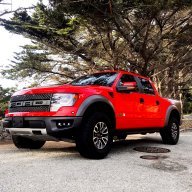 New Member! Was brought here from a Glendora police officer. After pulling me over for window tint, he told me to join the forums. Jun 5, 2019